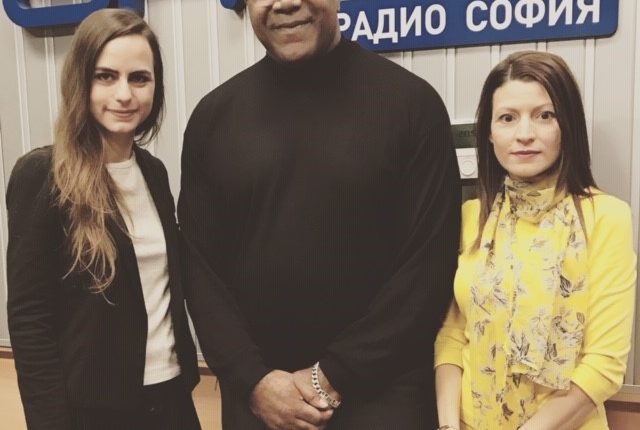 The American football star and famous entrepreneur Jamie Williams visited Bulgaria again in the period November 4 to 16, 2019, as part of BEC’s mission. His visit included numerous lectures, classes, business meetings, consultations of start-up companies and various media appearances. The aim of Jamie Williams’ visit was to encourage Bulgarian business, to motivate young entrepreneurs and to improve their leadership skills.

The events took place in Sofia and Varna. In the first days the American football legend gave interviews to leading Bulgarian media like the Bulgarian National Radio, Darik Radio and TV Evropa among others. Next came consultations with companies in the IT branch – Office R&D and Leanplum. Jamie Williams also held a lecture on the topic of Leadership at Telerik Academy.

He visited Boyana Film Studios as well, where he made useful contacts for future partnerships in the film industry. Jamie Williams, in addition to being a champion of American football and entrepreneur, is also a film producer, actor and screenwriter. He wrote one of the most emotional speeches in American cinema, which Al Pacino gives in Oliver Stone’s Any Given Sunday.

Jamie Williams also held a special motivational seminar during his stay in Bulgaria. It was dedicated to the Levski football club and the entire team was present, as well as the coaches and management. The event was covered in various media. Jamie Williams motivated the Bulgarian footballers by telling them about how an athlete can continue to be successful even after the end of their professional career and about how profits can be made from sport. But the focus of his lecture was the creation of successful teams and leadership.

In Varna Jamie Williams opened new co-working spaces, gave a lecture at the Varna Free University, gave a presentation at the Cherno More Hotel for Entrepreneurs’ Day and visited the old Bulgarian capital of Pliska.

The American mentor went to Plovdiv as well, where he saw a basilica restored by the America for Bulgaria foundation.

A charity exhibition and auction to support young talents in Varna